The article uses the hydraulically driven VVT system used in most of the mass-produced models in the Chinese automobile market as an example: 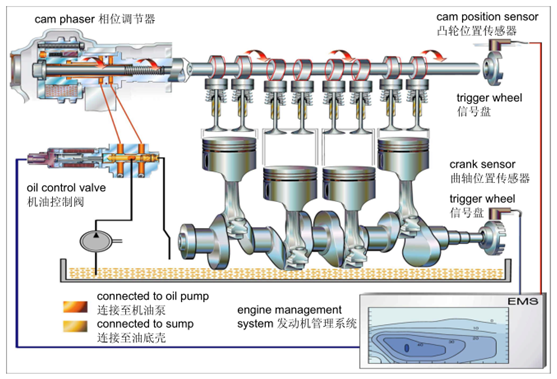 The VVT system in the above figure is mainly composed of a cam phaser (phaser) and an oil control valve (OCV). Cam phaser is the actuator of the system, and OCV is the controller of the system.


The engine management system EMS (usually also called the engine ECU) searches the MAP map based on the signals from the throttle opening sensor, engine water temperature sensor, speed sensor, air flow meter, etc., and calculates the required valve position under each engine operating condition. The time angle is the target position; meanwhile, the engine management system EMS calculates the actual position of the camshaft based on the feedback signals from the crankshaft position sensor and the cam position sensor. The EMS compares the target position with the actual position, and sends an actuation signal to the OCV according to the EMS control strategy to change the position of the spool in the control valve, thereby changing the oil flow direction and the size of the flow in the oil circuit. The constant signal is fed back to the VVT phaser cavity by hydraulic pressure to realize the relative rotation between the internal stator and the external rotor of the phaser to adjust the timing angle of the camshaft to adjust the intake (exhaust) The amount, and valve opening and closing time.

The VVT system is closed-loop control, and the three-point control method and PID control method are more common at present. The control algorithm of the solenoid valve is the key to the phase control. The whole system structure is divided into three parts: 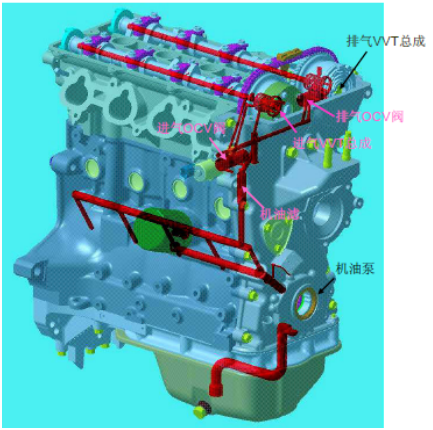 All the work of the VVT system needs to be completed by the engine oil. In order to ensure the timely and accurate work of the VVT, the oil pressure must be ensured within the working range. For this reason, the general VVT engine has a separate VVT oil circuit, as shown in FIG. 4. The oil is transferred from the oil pan to the camshaft by the oil pump, then passes through the OCV oil control valve, and then the control valve controls the amount of oil and the direction of oil inflow/outflow into the internal cavity of the phaser. According to the instructions of the ECU, OCV adjusts the flow direction of the oil through the axial position of the Spool Valve (spool) to rotate the blade relative to the casing, so as to realize the adjustment and control of the gas distribution phase as shown in FIG. 5. 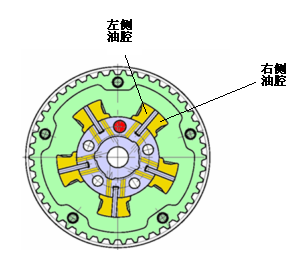 The sprocket, stator and cover plate together form a hydraulic cavity, and are divided into two oil chambers by a star-shaped rotor with an oil seal, as shown in Figure 7. The oil chambers are respectively connected to the camshaft and the OCV inlet and outlet oil holes.

The OCV valve of the VVT system is a proportional valve, which means that the movement position of the valve core is proportional to the PWM duty ratio provided by the engine ECU to the OCV coil. When the duty cycle is gradually increased, the electromagnetic force of the coil is gradually increased. The iron core assembly moves in the solenoid and pushes the valve core forward against the spring force. When the duty cycle signal gradually decreases, the electromagnetic force also gradually decreases. The spool gradually returns under the action of the spring force. During the movement of the spool, it cooperates with the valve sleeve to realize the switching of the oil circuit, thereby controlling the direction and flow of oil into and out of the OCV valve, and thus controlling the flow of oil into/out of the phaser oil chamber.